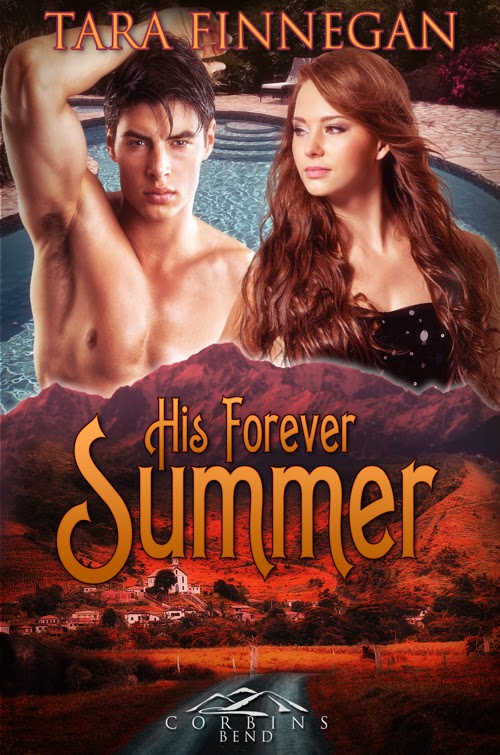 Today I'm talking about Tara Finnegan's new Corbin's Bend release, His Forever Summer. It's the book we've all been waiting for! Carla has been a grade A bitch throughout season one, the character you love to hate. So I'm guessing there are a few who would like to see the witch get her comeuppance. Does Kieran man up? Of course he does. He's eaten across with jealousy at the thought of someone else disciplining her, seeing her bare, touching her. And if the only way to prevent that is to do it himself, well then, he's man enough to do it! Here's a little snippet of that spanking.

“Not a very pretty litany, is it?” he said with a sigh when she was done. Carla shook her head while looking at the floor. “Look at me! I expect a reply when I ask you a question. You asked for this discipline. The least I expect is the courtesy of an answer. Don’t make me remind you again.”
“No, sir,” she quickly agreed. Why the hell did she call him sir? She hadn’t meant to. Once again, she had wished she had stuck with her original plan of the professional. There was no way in hell he could possibly have made her feel as small as Kieran did.
“Jim says you shouldn’t be allowed safe-word for a punishment, but I’ve never done this before so in the event of an emergency, shout Methon, okay?”
Instinctively, Carla nodded her reply but she caught sight of Kieran’s face.
“Methon, got it,” she quickly added.
“Come up here,” he instructed.
To Carla’s surprise, Kieran held out his hand to help her. The simple act of kindness touched her all the more because she knew how upset he was at her actions to his family. It felt soft but strong as he pulled her to her feet. And big. She gulped. This was it.
She had no idea what to expect, but he guided her in place across his knee, an intimacy that was totally unanticipated. He fixed her position so her torso was on the bed at a slight angle so her feet could touch the ground. The first few swats weren’t so bad. It was as if he was finding his way. Stingy but bearable. Almost too soft. Carla was doubting he would quite drive his point home. The slaps rapidly increased in speed as his confidence grew and before long, Carla was wriggling and writhing to escape the fall of his hand as the heat accumulated and spread. Although still not unbearably hard, he was getting every part of her bottom through her thin panties and the cumulative effect was taking its toll. The seams of her underwear scratched against her scorched skin on the impact of his hand, making it feel like razor blades were cutting through her skin. Carla was now shouting her apologies but he just continued over and over. Swat after swat raining down. She was relieved when he ceased.
Her relief was short lived though. She felt him fumbling beside her legs, grabbing out her Corbin’s Bend paddle. She felt him tugging at her panties and she died a death as she realized she was now fully exposed. First her bad deeds, now her bottom were laid bare.

His Forever Summer
Carla Methon has tread on a lot of toes, men’s and women’s alike. But no one could be more dissatisfied with Carla than the lady herself. With a compunction to throw herself at every man within a three mile radius and a serious case of foot in mouth disease, Carla knows she is in desperate need of being taken in hand before she does any more damage to her reputation.


Kieran O’Brien needs to escape a broken relationship and he invites himself to spend a summer with his brother in Corbin’s Bend. But Kieran is a totally unsuspecting vanilla with no idea of the ethos of the community he is about to enter.

The pair strike up an unlikely friendship of vanilla and spice, with one stipulation – it is only a summer fling. By the time Kieran boards his flight to return to Ireland he wishes his summer could last forever. Can he find the courage, not only to admit the extent of his feelings, but to take on the role Carla so desperately needs him to be?


The accidental writer, that's me!
A lot of writers will tell you that they dreamed of being a writer for years and were making up stories from they were knee high to a grasshopper. And a lot of them loved English class.
I dodged all forms of essay (not even bothering to look for an original or plausible excuse) and entertained myself and by poor desk mate during my English classes by very rudely paraphrasing and taking the mickey out of Francis Bacon...yep, looking back, that's probably when I should have had my first good spanking. If not for wasting my own education, then surely for distracting my misfortunate neighbour.
Then I started an affair with my computer, so much so that I nearly had to be surgically removed from it. And what's an affair without a good measure of hot sex and erotic spanking?