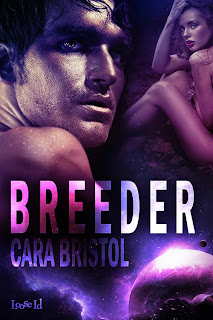 This week I am very excited to be highlighting one of my favorite spanking romance authors, Cara Bristol! Tuesday, October 15th is the release day of her much anticipated sci-fi erotic spanking novel, Breeder. I have to admit I have been salivating for it's release ever since she announced it's possibility in a sneak preview on her blog back in May (which you can see here.) Part of what excites me is that this is so different from what Cara has written thus far. I love sci-fi in this genre because all bets are off. Anything can happen in the world that is created. The author can push things beyond the normal boundaries of any other genre. I am interested to see how far Cara has pushed the envelope in Breeder. From the excerpts I would say pretty far!

Cara is known best for her Rod & Cane series, which is contemporary Domestic Discipline. Cara has built quite a fan base around this series. If you have read any of her other releases you will know that it has become more and more apparent that she can do anything she sets her creative mind to. Cara is a true professional and a true talent in this genre. She is definitely on my must read list! I will be highlighting Cara & her works all week, today through Thursday. Be sure to enter my giveaway contest at the end of each post & come back daily for additional entries!

Cara has been so kind to visit & share with us a little more about her background. I don't know about you, but I love to learn about my favorite authors backgrounds and insights! Without further ado I give the floor to Cara!

One day I decided to “play,” and over maybe a week or two, wrote a kinky short romance. Intimate Submission was a sexual smorgasbord—a little bit of everything, including spanking. In my own humble, modest way (ahem) I decided the story was good enough to be salable. I submitted it to Black Velvet Seductions for its “spanked wives anthology,” and it was accepted. I wrote a second story, Secret Desires, for the Spanked! anthology as well.

The turning point for me, however, was Unexpected Consequences, about a naïve bride who marries a man who belongs to a secret organization of men who discipline their wives by spanking. The inspiration came from the knowledge that many DD couples hide their practice from their friends and families. The children don’t know that daddy spanks mommy.  I realized I had a series on my hands—that I could tell the stories of the Rod and Cane Society members. Three novellas and a short story have been published by Loose Id: Unexpected Consequences, False Pretenses, Body Politics and Disciplinary Measures (short story). All the Rod and Cane books are written to be read as stand-alones, but the organization changes and grows as the series progresses. The second book, False Pretenses, is actually quite pivotal to the organization, because it changes everything from that point forward. The fifth book, which I’m writing now, will represent another huge change for the organization.

When I first began writing Breeder, I expected it to be heroine Omra’s story (hence the title), but it is as much about hero Dak as it is about her. Dak is a powerful warrior, but he is also somewhat of a “wounded” hero who was betrayed in his past. After he purchases Omra, she causes him to question everything he was taught the world, everything his people believe to be true.

I intend for Breeder to be a series, I just haven’t decided whether to make it three books or five. My initial thought was a trilogy, but I could write one book for each Alpha of Parseon.


Breeder is my eleventh/twelfth published title, which includes ten stand-alones and two anthologies. (The count is confusing because two of the stand-alones also are included in one of the anthologies). I have two projects under contract and I’m writing the fifth Rod and Cane novel, which will be Liz Davenport’s story. She was a secondary character in Unexpected Consequences and Body Politics.

To secure his legacy, Commander Dak, a ruling Alpha of planet Parseon, purchases Omra, a breeder slave. He intends to impregnate her, produce a son, and hand her off to his anointed beta partner. As Dak and Omra discover a sexual bliss banned by law, he begins to question Protocol-sanctioned male domination, causing him to jeopardize his command and endanger the life of the woman he has come to love.
Breeder explores the concepts of gender roles and social prohibitions against deviant behavior. It includes graphic M/F and some M/M sexual content and domestic discipline.


Thank you, Cara for visiting! Enter here to win your choice of book off of Cara's backlist!