Spanking author, Rollin Hand, is here today to talk about his smoking hot new book, The Princess and the Outlaw! Whew, you are not going to want to miss this!

I’m here today on Corinne Alexander’s blog to talk about my latest book. Thanks, Corinne, for the opportunity to tell everyone about ThePrincess and the Outlaw. 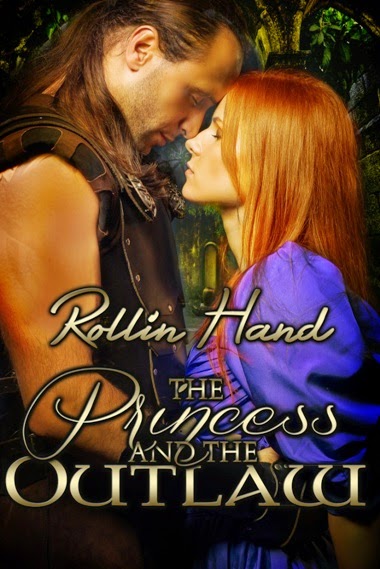 The Princess and the Outlaw is a swashbuckling tale set in an imaginary medieval kingdom. The story is about an attempt by villainous conspirators to murder the king, Robert Greystone, and usurp the crown. In order to do this, they devise a plan to kidnap the king’s only child, his daughter Princess Juliet, and replace her with an imposter. This leads to a role swap by the female leads reminiscent of Mark Twain’s The Prince and the Pauper, as Scarlett, an orphan girl is substituted for the princess. There are two romantic sub plots, one involving the princess and an outlaw who comes to her aid, and one involving a knight who befriends the imposter, an unwitting orphan girl. Both the princess and her orphan counterpart are, at times, not very well behaved, or fall into perilous situations that lead to chastisements common to the era, making this very definitely a “spanking romance.”

Here is the blurb:
Treachery is abroad in the land, and the kingdom’s royal princess is on the run, torn away from the pampered life she has always known. Her only salvation lies with a notorious outlaw in the depths of a dark forest. Though she is accustomed to giving commands rather than obeying them, the princess soon learns that in this outlaw’s realm disobedience brings swift chastisement. But to the amazement of the princess, this roughhewn rogue’s affront to her royal person fans flames of desire which threaten to burn out of control.

At the palace the princess once called home, an imposter sits on the throne, an orphan convinced by the evil Red Countess that what she does is for the good of the kingdom. Even as the peasant learns to play the role of a princess, doubts surface in her heart and she begins to question everything she has been told. When a visiting knight starts to ask the same questions, she wonders if he can be trusted, but she quickly discovers that whether she trusts him or not, he is more than ready to compel her cooperation with a firm hand applied to her bare bottom.

The courage and wits of all four—the princess, the orphan, the outlaw, and the knight—will be needed to overcome the dark shadow imperiling the kingdom, for danger lurks at every turn and the wrath of the Red Countess will surely fall upon those who oppose her plans.

Here is an excerpt from the book:
An assistant in a leather apron stood behind the tall man. He turned to the assistant and said, “Strip her.”
Scarlett screamed as the burly assistant tore at her clothing while the courtier held her. Her dress was shoved down, torn from her shoulders. It fell in a crumpled heap at her feet. Then the leering gaoler ripped off her chemise.
“Fasten her wrists in the manacles,” said the tall man, indicating the cuffs that hung from chains in the center of the room. The two men who had stripped her hustled her over to the spot below the manacles and roughly raised her arms. One held her while the other clamped a manacle on each wrist and tightened it down. Then they stepped back. The leathered assistant turned a crank on the wall and Scarlett felt her arms being pulled up. He cranked it until she was stretched taut, almost on tiptoe. She swayed, stumbling, nearly naked except for her silk drawers, and feeling horribly exposed and helpless. What were they going to do?
Then a sound. Heavy boots. Someone was coming. She turned toward the door. Lord Cramden entered. He glared at Scarlett and she withered under his gaze.
“So,” he said, “our little princess is ready for her lesson in obedience, is she?”
The watching men leered at Scarlett’s helpless and nearly naked body, writhing in the flickering torchlight. “Master Jerrold,” said Lord Cramden, “I think we should begin with the short whip.”
“As you wish, sire,” said the tall man, bowing.
Scarlett’s panicked eyes followed him as he strode to the wall. She saw him select a multi-stranded whip of some eight or nine cords. He took it off of its hook and shook it. The thin leather lashes, each about a foot and a half in length splayed out like snakes uncoiling. The whip looked like it could inflict some serious sting.
“Now, my little princess, let’s begin the lesson.” He turned to Jerrold, the tall man.
“Lower her drawers. You are to apply the whip to her hindquarters. One dozen to start, I should think.”


Scarlett closed her eyes. It was going to happen. She was to be whipped. She recoiled as she felt the man’s fingers pull the string on her drawers. Her last line of defense fell away as the flimsy garment slid down her legs. Her bare bottom felt a slight draft and she flinched as the man called Jerrold swooshed the whip through the still air in the dungeon.
Buy Links:
Amazon     Amazon UK     Barnes & Noble
Posted by Unknown at 2:10 PM

Email ThisBlogThis!Share to TwitterShare to FacebookShare to Pinterest
Labels: Rollin Hand, spanking fiction, spanking romance, The Princess and the Outlaw